The Making of the Guitar Wheel: The Story of Creator, Dennis Cheatham

Ever wonder just how the Guitar Wheel came to be? For Dennis Cheatham, whose invention this truly unique music theory tool is, the original concept was clear from the very beginning. From conception to completion, the Guitar Wheel had literally been under construction for 15 years prior to its 2005 debut at NAMM.

Dennis, ambitious to learn music theory to improve his own guitar playing, wanted to create a working tool to help musicians grasp theory and chord construction. He accomplished this by putting the information directly on a curved version of a guitar neck. Simple, right? Not really. The intricate parts and pieces of the Guitar Wheel were originally cut, pieced, pasted, and colored by hand. Revision after revision required constant structural and cosmetic changes to the Wheel. It was the ongoing art project that took over the family dining table, and eventually the extra bedroom, and even grew to have its own set of art supplies. With no deadlines and before the though occurred to mass produce and market the Wheel, Dennis would work on it for a while and put it away, then work on it again whenever inspiration struck.

What began for Dennis as a hobby became a passion and ultimately a business. His passion helped develop a product that is marketable and useful to more people than just himself. Dennis' family was very encouraging, as they had watched the project evolve through all its phases and realized its potential as a product that defied the current standards of boring chord books, charts, and the extremely basic and limited circle of fifths. The Guitar Wheel contains a library of music theory in one eye-catching, easy-to-use tool.

Together, the family moved forward with Dennis' growing dream of making the Guitar Wheel into a reality, and Music Master Publishing was born to market the Guitar Wheel to the world. After securing copyright, trademark, and sufficient working capital, the Guitar Wheel went to print for the first time in 2004. In January 2005, the Guitar Wheel had its own booth at the NAMM show in Anaheim, CA, where it launched to the more than 60,000 people in attendance that year. Dennis and wife Nancy, along with their three children, Dustin (current president and CEO), Dana, and Dale, worked the booth to support the new family business and help demonstrate the Guitar Wheel. Initial public reception of the Guitar Wheel was fantastic, and business has steadily grown over the last five years. The Guitar Wheel is now in its third printing and is sold to distributors worldwide.

The Cheatham family is proud of Dennis, his vision, and the success of the Guitar Wheel. They are extremely grateful for the support of all the friends, professionals, and artist endorsers who have helped the business grow. Dennis remains humble and thankful to God and to his family for their unwavering support. Ever creative, Dennis is authoring a book to complement the Guitar Wheel, and has entertained ideas for other educational music theory related products. We think it’s an excuse to buy more art supplies!

Posted by Music Master Publishing Blog at 4:53 PM No comments: 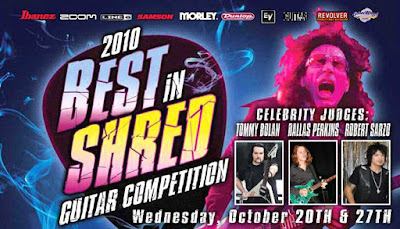 Guitar Wheel artist Tommy Bolan will be a celebrity judge in the "Best In Shred" Guitar Competition at the Sam Ash Music store in Canoga Park. The competition is being held Wednesday Ocotber 20 at 7:30 PM, with a second round of competing on Oct 27 also at 7:30 PM at 20934 Roscoe Blvd Canoga Park, CA 91304.

The guitar competition at Canoga Park CA is part of Sam Ash's nationwide coordinated "Best in Shred" contest. Every Sam Ask Music Store in the USA will also host the "Best In Shred" contest on the same dates as above. The top 4 shredders from October 20, and 27 go on to compete again Novmeber 10. Shredders will be eliminated and some will be be chosen to compete in Sam Ash regional finals in December. The final tier of the competition will be held at the NAMM show in January 2011 in Anaheim CA. Finalists will get the honor of performing in select exhibitors booths at the NAMM show. The winner will receive $20k in prizes and the opportunity to jam with Steve Vai on stage in concert.

All the details are on SamAshmusic.com/vai 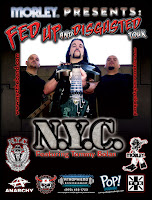 Guitar Wheel endorser guitarist Tommy Bolan and his band NYC are beginning their tour crossing the USA on September 3, 2010. Check www.nyctheband.com for tour dates! The "Fed up and Disgusted Tour" is taking Tommy and band throughout the south, northwest and mid-west United States. More dates and places TBA.

You won't want to miss their hard hitting metal guitar and rhythm driven rock. Tommy's guitar playing is unlike any other. Forget being impressed with how fast he can shred, Tommy's songs are melodic, and the lyrics meaningful, you'll find yourself singing the tunes in your car or at work after hearing them one time. Listen to and order NYC's latest album Zyko

Posted by Music Master Publishing Blog at 2:21 PM No comments: